Nearly nine in ten adults in the U.S. have some form of gum disease. Periodontal diseases can be as minimal as simple gum inflammation, but can develop consequences such as severe damage to the gums and jawbone. When left unchecked, these issues can lead to lost teeth, infection and even heart disease. The dentists at Houston Medical Center Dental can prescribe a treatment regimen to combat the disease, as well as surgical procedures to give the patient a healthy mouth and strong teeth.

Gingivitis is a common disease of the gums. The disease stems from bacteria that feed on plaque, tartar and food particles left on the teeth. The bacteria cause the gums to become swollen, tender and red. The friction and stress of chewing can also cause the gums to bleed. While gingivitis by itself does not attack the gums so severely that tooth loss is an issue, the disease can lead to other problems.

Patients can prevent gingivitis at home by brushing and flossing at least once daily, along with using a strong antiseptic mouthwash to kill any remaining bacteria. The skilled hygienists at Houston Medical Center Dental can also help prevent gingivitis by giving patients a thorough cleaning during their semi-annual checkups.

A more serious form of gum disease is periodontitis. Periodontitis involves advanced bone loss around the tooth root. If left untreated, the disease can contribute to the loosening or loss of teeth. Symptoms can include bleeding and swelling of the gums, halitosis, and deep pockets between the teeth and gums.

The professionals at Houston Medica Center Dental treat periodontitis by removing the plaque around the affected area. They use deep-cleaning techniques which include scraping off the tartar above and below the gum line, a process known as “scaling”. They also employ “root planing”, which removes the places where bacteria can gather near the root of the tooth.

If you have bleeding gums or other symptoms of periodontal disease, contact Houston Medical Center Dental to make an appointment today! 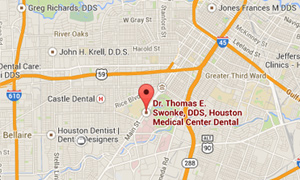